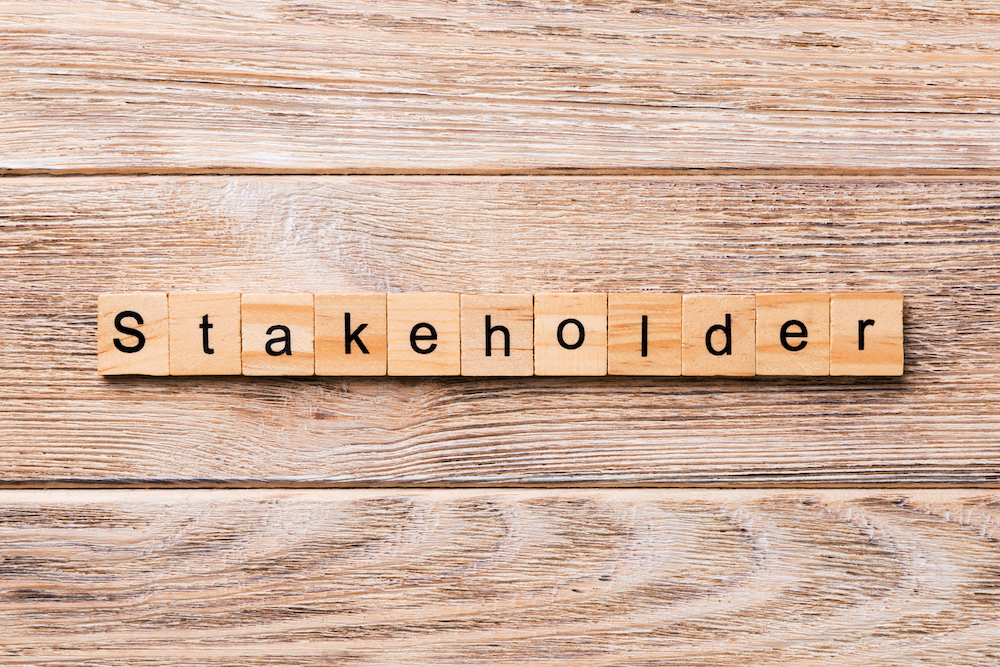 There are many stakeholders who leaders need to focus on.I had a coaching client who was truly the epitome of a people person. Not a flaming extrovert, she just cared what mattered to people and what was important to them. With every decision she made, she considered all the stakeholders that were impacted. A stakeholder is any person (or organization) who is affected by your work, who has influence or power over it, or has an interest in its success. Stakeholders can be customers, owners/shareholders, employees, families of employees, and even the community. My client believed that the organization would improve by focusing on everyone who cared about the products and services of the organization and what those people needed. She looked at all organizational issues through the eyes of each stakeholder and always focused on how to improve those relationships and solve the stakeholders’ problems to improve the organization.

She was an exceptional communicator, she consulted people early and often, and received useful information.  She showed that she cared by being empathetic, listening and building trust. She didn’t see issues as outside concerns that need to be managed, she saw them as serious topics that required dialogue.  She made difficult decisions that often included compromise, and she managed the potential risks by understanding what success meant to each stakeholder and sharing the sometimes difficult news while still appealing to their values.  She always took responsibility for the decisions and people loved working with her.  Customers loved her because they felt she was always looking out for them. From an outsider view, she seemed very successful.

The coaching challenge she wanted to work on was that building all of these relationship took a tremendous amount of time.  The side-effect of being so focused on all the stakeholders was that it was sometimes hard for her to execute a plan. She spent a lot of time in information gathering and sharing and needed to spend more time on implementation.

Another problem that came up often in her organization, that she actually handled well, is that some people emphasized one stakeholder over another and people were confused. Focusing on stakeholders means that you are trying to satisfy multiple stakeholders at the same time: customers, employees, stockholders, your executive team, communities and all stakeholders will be affected differently from each other – some in opposite ways.

As a first step to coaching her on this, we talked about how to prioritize stakeholders while doing her best to remain dedicated to them all.  In other words, apply different engagement tactics based on interest and ability to make a difference in her work. She knew that there were some stakeholders who were high powered and interested in the outcomes.  These people demanded attention that she couldn’t ignore, though she found that she could manage the relationships with less time and energy if she created a consistent way of keeping them updated.  Next were high powered people who weren’t that interested. She could keep these people satisfied by sending memos and meeting minutes and perhaps build their interest level. (Or decrease it if there was a value in that.)  Then there were lower powered, interested people who she could keep informed with quick in-person chats and emails.  And the lower powered, less interested people were easy to monitor through simple status reports and updates.

She remained aware of all the stakeholders, determined their interest and influence and created a standard communication management plan to streamline her connections with everyone.  She continued to engage and influence the stakeholder while saving herself time and the ability to get more done on the execution side of her role.  It’s true that it remained a balancing act, though she is proud of the deep and meaningful relationships she built that influence the direction of the company each day.  With more of her time spent on execution, she was proud of the measurable results as well.